Deprecated: The $control_id argument is deprecated since version 3.5.0! in /www/covidmewstoday_398/public/wp-content/plugins/elementor/modules/dev-tools/deprecation.php on line 304
 Covid hospitalisations rise in Europe as sub-variants fuel new wave

European countries are experiencing a surge in Covid-19 hospitalisations driven by sub-variants of the highly infectious Omicron strain, threatening a fresh global wave of the disease as immunity levels wane and pandemic restrictions are lifted.

Admissions have risen in several countries including France and England, according to data analysed by the Financial Times. The BA.5 sub-variant of Omicron now accounts for more than 80 per cent of new infections in Portugal. In Germany, where admissions have been rising for over a week, the share of Covid infections ascribed to BA.5 doubled at the end of last month.

Experts warn that the widespread scaling back of testing and surveillance may be compromising the ability of countries to spot new mutations and react quickly. They fear this could lead to waves later in the year that will put pressure on health systems and potentially prove harder to contain.

“We’re not out of the woods with this at all. The biggest concern is we’ve let our guard down quite considerably,” said Lawrence Young, a virologist at the UK’s University of Warwick. A key question concerns how the situation may develop in the northern hemisphere when it enters its winter months, he said, as health systems contend with seasonal respiratory viruses on top of the likely arrival of new variants.

Piotr Kramarz, head of surveillance at the European Centre for Disease Prevention and Control, said Omicron sub-variants such as BA.4 and BA.5 had an element of “immune escape” — meaning that neither previous infections nor vaccines provide such strong protection — which was driving them to overtake previously dominant variants.

Kramarz said BA.4 and BA.5 did not appear to lead to a more severe illness, but he warned that those who had already had the virus were being infected again. Triple-jabbed people were also falling sick, although evidence suggested that vaccines continued to provide strong protection against the worst outcomes. 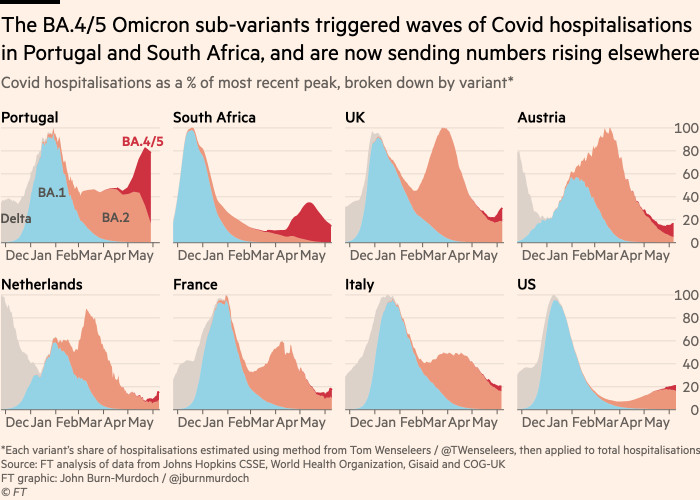 The potential power of one Omicron sub-variant, BA.5, is clearest in Portugal, where there has been a large surge in Covid hospitalisations over the past month, rising almost as high as its original Omicron wave in January and driving higher excess mortality — the difference between deaths from all causes during the pandemic and the historic seasonal average. BA.5 quickly became dominant after it was first detected in the country at the end of March, according to the National Institute of Health (INSA). By June 5, it was estimated to account for 84 per cent of new infections.

In Germany, admissions have risen over the past 10 days following a steady 10-week decline, although current levels remain at about a quarter of the March BA.2 variant peak, according to FT analysis of hospital data. The share of BA.5 in the total number of infections doubled in the last week of May to 10 per cent.

Hospitalisations in France are rising for the first time since early April and BA.5 has grown from 5 per cent to 18 per cent of sequenced cases in the week to May 24, according to public health agency Santé Publique France.

But scientists are still determining the precise cause of the uptick in hospital admissions in parts of Europe. “It’s very hard to distinguish whether it is more transmissible or whether it is escaping waning immunity from vaccines,” said Antoine Flahault, director of the Institute of Global Health at the University of Geneva. In England, there were an average of 639 new Covid cases a day in hospitals last weekend, up 29 per cent on the previous weekend, but still less than a third of the peak during April’s BA.2 wave.

Although admission numbers are still rising, there are early hints that week-on-week growth may be slowing. Experts caution that it is too early to say the wave was in remission, but if the slowdown continues it would suggest the peak may be close.

Saffron Cordery, interim chief executive of NHS Providers, which represents health trusts across England, noted that vaccinations were “still holding back the full force of the infection” and there had been only “a tiny increase” in patients requiring ventilation beds.

The new sub-variants are also making headway in the US, where data published by the Centers for Disease Control and Prevention show that combined they made up more than 20 per cent of all Covid cases in the week to June 11. They are, however, arriving hot on the heels of the US’s BA.2 variant wave, which makes it difficult to disentangle their impact on the overall trend.

Amesh Adalja, a senior scholar at Johns Hopkins school of public health in Baltimore, said BA.5 appeared to be more common in the Midwest and southern states. But he suspected that the sub-variants would become more dominant in the coming weeks.

Eric Topol, founder and director of the Scripps Research Translational Institute, said BA.4 and BA.5 were markedly different from previous Omicron sub-variants, adding that they are “more resistant” to monoclonal antibody therapies, which work by infusing patients with proteins that mimic the body’s immune response.

Without comprehensive data on vaccine response it is difficult to tell how much the sub-variants would reduce protection from hospitalisation, according to Topol. He said that while such protection for boosted individuals was about 95 per cent against the Delta strain, and 85 per cent for BA.1 or BA.2, levels could fall to the low 80s or high 70s with the new sub-variants.

Despite such concerns about reduced protection, governments do not seem to be considering reintroducing restrictions.

Portugal is not planning to bring back any curbs or implement new measures. And Germany’s justice minister, Marco Buschmann, has rejected the adoption of new restrictions until the impact of previous ones has been assessed, despite calls from teaching unions to prepare for an autumn wave.

Experts have warned against complacency. In the US, Topol said authorities had failed to grasp the threat posed by the sub-variants and needed to do more to protect the population, including promoting mask-wearing, vaccination and boosters. “They’re basically pretending everything is done — it’s over,” he said. “That couldn’t be further from the truth.” Additional reporting by Peter Wise in Lisbon, Guy Chazan in Berlin and Akila Quinio in Paris

This May Be the COVID Variant Scientists Are Dreading

Read More
CCovid Updates
According to the Health Ministry, 11,438 tested positive for the virus on Sunday, 68,000 during the past seven…
Read More

Read More
CCovid Updates
From remote school to financial uncertainty, the ongoing COVID-19 pandemic has been an immensely difficult time to raise kids. And more and more…
Read More