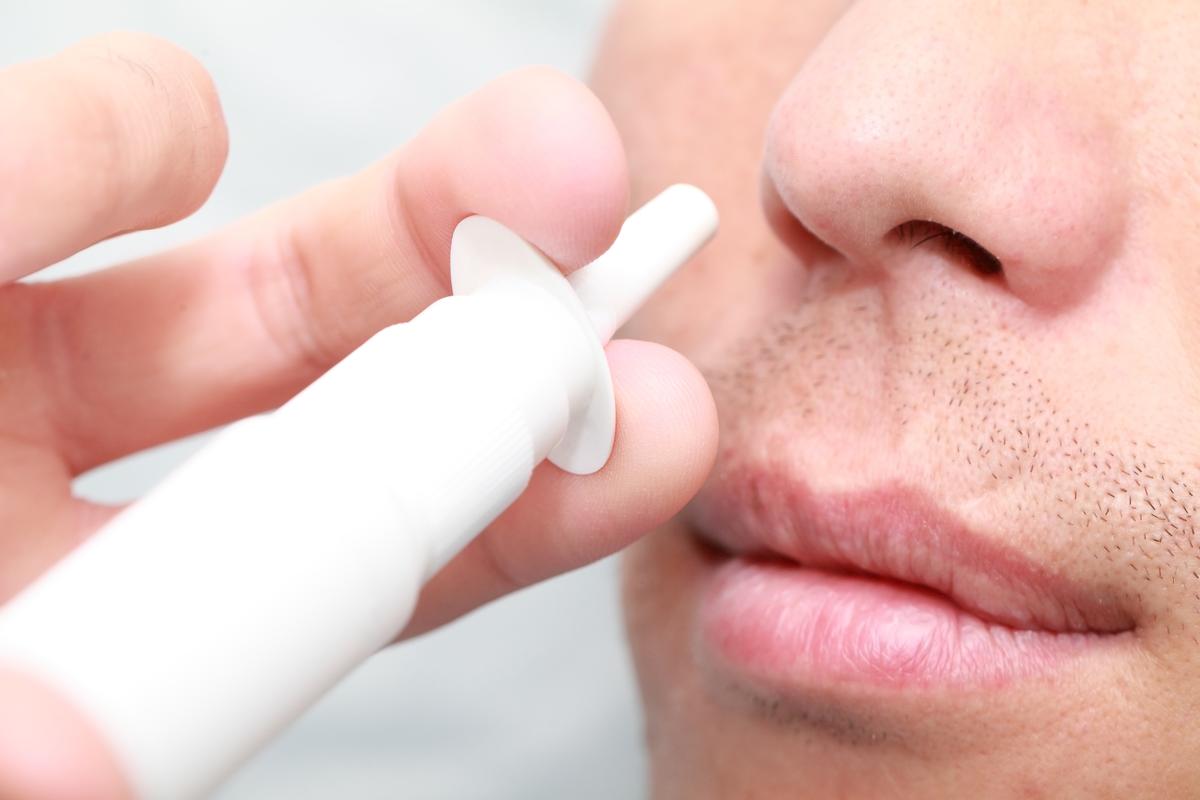 The spray was successful at preventing infection in early animal tests and the researchers are now looking to fund human trials
Depositphotos
New research led by a team from Cornell University and the University of British Columbia has demonstrated a novel nasal spray can prevent infection from SARS-CoV-2. The experimental treatment was found to be effective in preliminary animal studies with the researchers now looking to optimize the spray and move to human trials in the near future.
A nasal spray that can protect a person from a SARS-CoV-2 infection is certainly a compelling prospect. Imagine taking a few short puffs in the morning before heading out in the world and knowing that you are protected from one of the most infectious airborne viruses known to humanity. It’s an ambitious goal, and a new study is indicating it could be possible.
An article published in Nature is describing the discovery and development of a new small molecule that can inhibit the entry of SARS-CoV-2 particles into animal cells. The molecule, dubbed N-0385, was discovered as researchers explored a variety of ways to inhibit the mechanisms SARS-CoV-2 uses to enter human cells.
To test the new molecule the researchers turned to a special kind of engineered mouse model. Normal mice, the mainstay of lab research, unfortunately are not useful for most COVID-19 studies because they don’t carry the same receptors that SARS-CoV-2 attaches to in humans. Scientists have, however, genetically engineered a specific mouse model to express those human receptors and enable effective testing of new COVID-19 treatments.
“This is the first of its kind. One advantage is that it works early in the infection, even after someone has already acquired the virus.”

The new research tested intranasal dosages of N-0385 in this particular mouse model and found it effectively prevented SARS-CoV-2 infection. The nasal spray was protective against the original strain of SARS-CoV-2, as well as several variants including Alpha and Delta. It has yet to be tested against Omicron, but the researchers expect it to remain effective.

As well as working successfully as a prophylactic the nasal spray was found to also serve as an effective treatment, reducing disease when it was administered within 12 hours of the animals being exposed to the virus. Hector Aguilar-Carreno, senior author on the study, said this new molecule is unique in its ability to work as both a preventative tool and an antiviral treatment.

“There are very few, if any, small molecule antivirals that have been discovered that work prophylactically to prevent infection,” said Aguilar-Carreno. “This is the first of its kind. One advantage is that it works early in the infection, even after someone has already acquired the virus.”

The research is not the first to look at developing a nasal spray that can prevent SARS-CoV-2 infection. A human clinical trial is already underway in Australia testing a widely used anti-coagulant called heparin for this very purpose. That Australian research expects to have some results to report later this year.

The team behind N-0385 optimistically suggest it is possible the treatment could be available by the end of the year. But that timeframe depends on large volumes of money being quickly raised and every stage of human trials going perfectly.

It is more likely this research will move a little more slowly as plenty of work is still needed to establish the safety of this new molecule in humans. Aguilar-Carreno does indicate this molecule is promising as it could hypothetically be used to target a number of viral infections such as influenza and other coronaviruses that rely on this same mechanism of cellular entry.

“The N-0385 therapy is simpler and less expensive to mass produce than other types of COVID-19 treatments, such as monoclonal antibodies,” added Aguilar-Carreno.

COVID-19 in low-tolerance border quarantine systems: Impact of the Delta variant of SARS-CoV-2

Finding the next pandemic virus before it finds us

Read More
CCovid Updates
Medics take a patient from an ambulance into the Royal London hospital in London on Jan. 19, 2021.(Tolga…
Read More