Home How Covid Shook the US: Eight Charts that Capture the Last Two Years
CCovid Updates

How Covid Shook the US: Eight Charts that Capture the Last Two Years 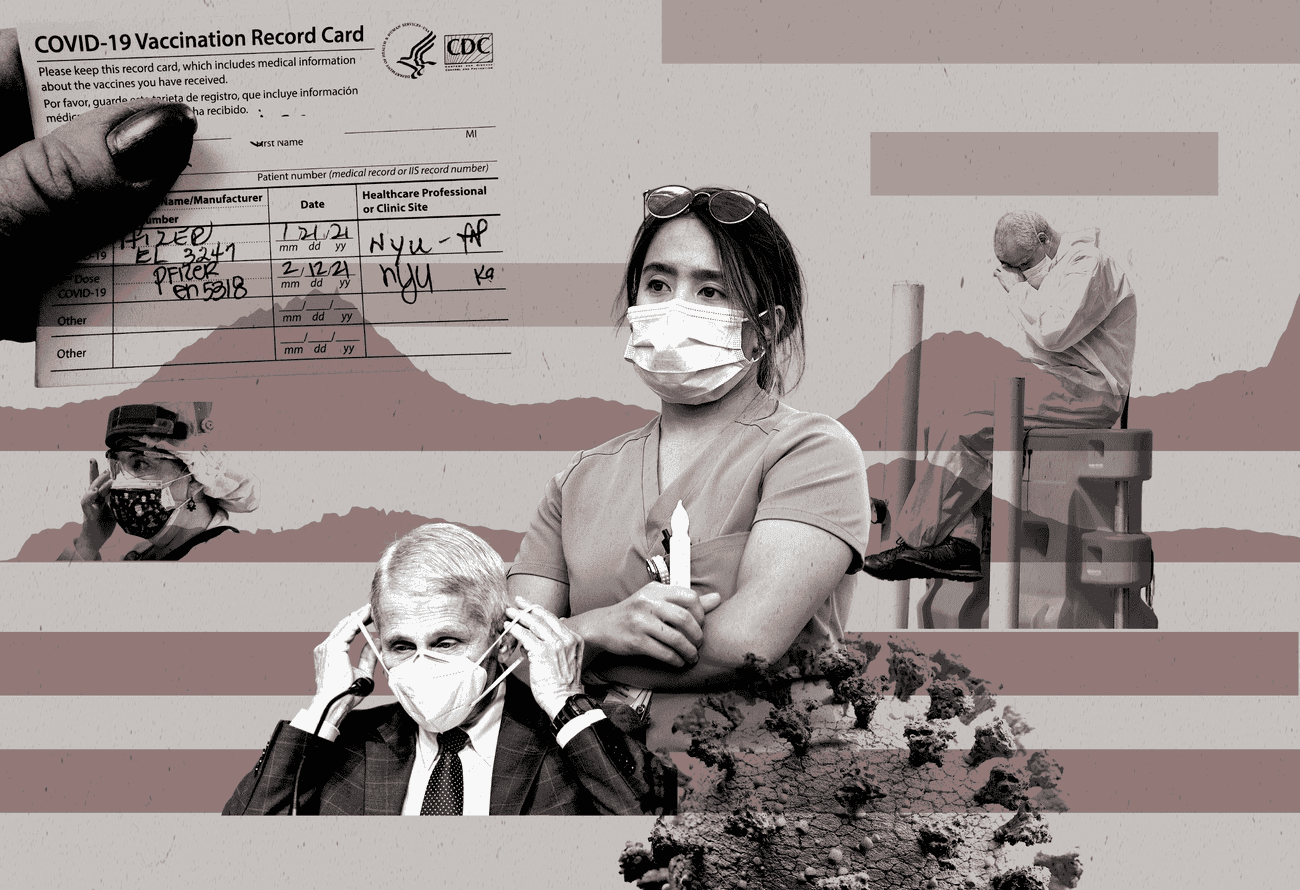 In just two years, Covid has killed nearly 1 million people in the US. Composite: Getty
Images/EPA/Shutterstock

The Covid-19 pandemic has hit the United States hard, sparing no region, race or ethnicity, though some groups have suffered more than others.

The virus has caused more than 965,000 US deaths; strained healthcare systems; changed companies and employees’ expectations of one another; and sparked political battles over vaccine mandates and controls.

As we reach the second anniversary of the pandemic being declared a national emergency in the US, infectious disease experts suggest – with caveats – that the worst could be over and that we could soon see something like life before Covid-19, at least in terms of gathering with others indoors.

1 The waves of Covid – could Omicron be the last?

We’ve had multiple false dawns that the worst is over and now hopes are growing again, with controls easing, but experts have cautioned we must remain vigilant for new variants and prepare for an endemic phase of the disease.

During the first half of 2021, people regained a sense of hope after an extraordinary year filled with death, job loss and isolation from family and friends. Vaccines became widely available; the number of Covid-19 cases and hospitalizations decreased; and the weather warmed, which allowed people to more easily gather and worry less about contracting the virus.

Then that summer, the Delta variant, which was twice as contagious as previous variants, arrived in the US, causing a new wave of infections and worries. During the peak of the third wave of the pandemic in winter 2020-21, there was a seven-day average of more than 130,000 hospitalizations. At the height of the Delta wave, that number was 100,000.

Once that wave ebbed, talk of a return to normal again emerged, only to be interrupted by another even more contagious variant – Omicron – though the symptoms from this one were less severe, particularly for people who were vaccinated against the virus. That wave caused the highest number of hospitalizations throughout the entire pandemic, at one point leading to a seven-day average of almost 160,000 hospitalizations.

“There were two occasions, just before Delta and just before Omicron, where as a society and public health community, we thought we were on the verge of some variation of success,” said William Schaffner, an infectious diseases expert at Vanderbilt University School of Medicine.

Now that the number of Omicron cases and hospitalizations have plummeted, elected officials and business leaders again feel confident in their reading of the waves – but Schaffner does not necessarily share their assessment.

That’s in part because even if we declare Covid to be endemic in the United States, meaning that it’s a regular part of life here and more manageable, rather than a pandemic, meaning an ongoing global outbreak, a new variant could crop up in a different part of the world that evades existing vaccines.

“We would have to create new vaccines and start vaccinating all over again, which would have all the impact of the proverbial lead balloon,” said Schaffner. “We are a very large and diverse country” so the end of the pandemic “won’t happen simultaneously … but maybe by the end of March and the beginning of April, we can be there over most of the country”.

Different US regions had different pandemics

The US is a large and diverse country. Its rifts and inequities were laid bare and worsened by the virus.

Democratic governors instituted stricter lockdown measures than their Republican counterparts. Red states had significantly lower rates of vaccination against Covid than blue states. People of lower income were less likely to get vaccinated.

Black Americans were significantly more likely to die of Covid, even though the Black population is younger than the nationwide average.

“You name the illness, whether it’s a communicable disease or it’s diabetes,” minority populations “are disadvantaged in terms of the impact of disease”, said Schaffner. “This has been true of the impact of Covid.”

While Black people were less likely than white and Hispanic people to get vaccinated, they overcame their vaccine hesitancy more quickly than white people, according to a study in the Journal of the American Medical Association.

“When the vaccines were touted as having been created at ‘warp speed’, well, we in science were very proud of that, but the way that was heard by a lot of people was, ‘Ooo, they probably cut corners,’” Schaffner said. But “vaccine acceptance has really grown in the Black community because at the local level, health departments and others have really worked hard to reach out, provide information and have people of color go out and be the messengers”.

More than 965,000 people have died from Covid during the pandemic. Such a toll is equivalent to the 15th most populous city in the country, more than San Francisco, Washington DC or Boston.

But Justin Lessler, an epidemiology professor at the University of North Carolina, suspects that is an undercount.

There have been more than 1 million excess deaths from Covid and other health issues in the US during the pandemic, according to the Centers for Disease Control and Prevention (CDC).

Lessler attributes the difference between the official Covid death tally and the CDC excess death count to Covid “deaths that did not get attributed to Sars-CoV-2, but that being said, I think detailed analysis will be needed before we can say that with 100% certainty”.

Whatever the actual number is, it could have been significantly lower had more people decided to get vaccinated against the virus, Lessler said. “I think it’s played a big role because being vaccinated decreases your mortality so much, and a pretty high percentage of deaths have been among the unvaccinated,” he said.

5 The unvaccinated are not changing their minds

Even though many Black people have managed to overcome their vaccine hesitancy, it’s unlikely that many more unvaccinated people in that demographic and others will opt to get the shots, said Schaffner. Over the last two months, the percentage of people who have been fully vaccinated has only increased by about three percentage points, from 61% of the US population to 64%.

Schaffner is also discouraged by the fact that only 43% of the people in the US who were fully vaccinated have received a booster dose, according to CDC data.

6 Race and ethnicity: Latinos and Asians are more likely to be vaccinated

“There has been an avalanche of new stories … that says boosters are good things, and they haven’t taken advantage of it, so I think we have pretty much reached a maximum, and if going forward, an annual booster may be required, that will be a hard sell,” said Schaffner. “We don’t do terribly well with our influenza vaccine campaigns – we do OK but not great – and I think we would have a hard time telling people to roll up both sleeves.”

It’s hard to imagine that there was a time when Zoom and other videoconferencing platforms were not a part of daily life for white-collar workers in the United States. But when the pandemic forced business leaders to temporarily – or permanently – close their buildings, the world changed.

By April 2020, 22m jobs in the United States were lost, and employment numbers still haven’t returned to their pre-pandemic levels..

“It was not just an unemployment increase, but also a lot of people left the labor force,” said Iwan Barankay, an associate professor at the Wharton School at the University of Pennsylvania.

US labor force participation in January was also only about 62%, which remained more than a percentage point less than before the pandemic, said Barankay. It had dipped as low as 60%.

Some industries, however, still have far fewer jobs, particularly those that necessitate people working in person, such as mining and logging, leisure and hospitality and education and health services.

8 Transportation and warehousing sectors grew the most

A major story during the pandemic has been the global supply crisis, which has been attributed to the various shocks that the world’s economies have undergone since the outbreak.

Off the coast of Los Angeles a record-breaking flotilla of container ships has been waiting to unload goods. The US has also experienced a giant labor shortage, especially in the leisure and entertainment sector; and there were a record 10m job openings in the country at the end of June.

Changes to the way we shop have been exacerbated by the crisis with a rise in “one-click ordering” being served by an expansion of warehousing by multiple firms including Amazon, which has had environmental costs for some communities.

Workers’ expectations of their employers also changed significantly during the pandemic. “How companies coped during the pandemic and their ability to transition back depended on the extent their work can be done from home,” said the University of Pennsylvania’s Barankay.

As workers slowly return to offices, will work life snap back to how it was in 2019?

Cristina Banks, director of the Interdisciplinary Center for Healthy Workplaces at the University of California, Berkeley, said the forced changes of the crisis have opened up possibilities.

“Some people are starting to think about how could we design work that will really benefit people and businesses,” Banks said.

“There are no answers yet, but I think instead of following blindly a leader” in an industry, “some people are engaging in conversations” and saying: “Why can’t we have people working worldwide and all different hours?”

Covid has Slipped from the Headlines – but with Restrictions Eased, Cases are Rising

Read More
UUS Covid News
WHEN BILL GATES took the stage at this year’s TED conference, he brought with him a battered wooden bucket…
Read More