Deprecated: The $control_id argument is deprecated since version 3.5.0! in /www/covidmewstoday_398/public/wp-content/plugins/elementor/modules/dev-tools/deprecation.php on line 304
 New view of lymph nodes shows immune cells in real time

Cornell researchers have for the first time successfully imaged the entire depth of the lymph nodes in a living mouse using three-photon microscopy. The breakthrough technique’s micrometer clarity and noninvasive nature allowed the team to observe the dynamic interactions of immune cells in real time and in an environment that is notoriously dense and difficult to study. 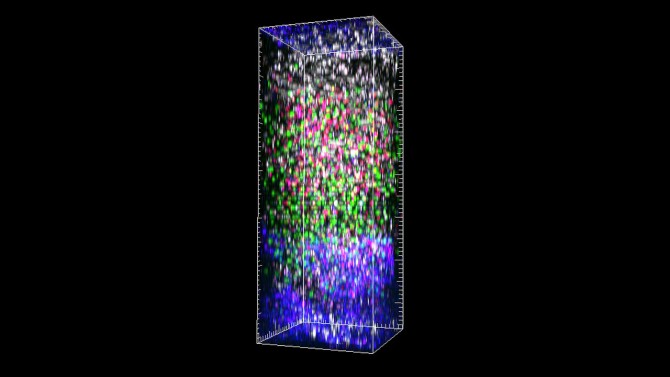 A 3D reconstruction shows the distribution of CD8+ T cells (red) and CD4+ T cells (green), along with lymphatic sinuses (purple), captured through three-photon microscopy in a mouse lymph node.

The researchers anticipate the process could soon bring the same precision and insight to cancer biology and other biomedical research fields.

“The type of dynamic tracking we did is exactly what immunologists would like to do,” said senior author Chris Xu, the IBM Chair Professor and director of the School of Applied and Engineering Physics in the College of Engineering and the Mong Family Foundation Director of Cornell Neurotech-Engineering. “Now for the first time, we can see things people have never seen before deep inside a lymph node, from the top to the bottom, in a living, breathing animal in real time. I think it will open doors for immunology. Suddenly we can see everything.”

Deep tissue three-photon microscopy, which uses fluorescent markers and laser illumination to capture high-resolution, three-dimensional images at the micrometer scale, was first demonstrated in 2013 by the Xu Research Group. The group has since used it to image, with high-resolution precision up to 1 to 2 millimeters, the brains of mice and zebrafish.

While the brain may be a complicated place, the lymph nodes are far trickier to parse.

But the challenge is worth it. The lymph nodes are crucial for studying immunology, as they function as a sort of Grand Central Station for lymphocytes, a type of white blood cell that fights infection in the body.

Xu’s group, which specializes in biomedical imaging and fiber optics, found it had the necessary expertise to tackle the lymph nodes thanks to Choe, who, in addition to being a physicist, trained in immunology before coming to Cornell for his postdoctoral research.

Choe set about reoptimizing the three-photon imaging process so that it could be applied to a very different type of anatomical environment, one that is jam-packed with vessels and cells instead of neurons. Then, with the support of a multi-investigator seed grant intended to catalyze collaborative interactions among Cornell faculty in Ithaca and New York City, Xu’s group partnered with Dr. Ari M. Melnick, the Gebroe Family Professor of Hematology/Medical Oncology and a member of the Sandra and Edward Meyer Cancer Center at Weill Cornell Medicine, who provided the transgenic mouse.

Using excitation wavelengths between 1,300 and 1,700 nanometers, the researchers were able to image blood vessels, lymphatic vessels, and migrating T cells and B cells throughout the entire mouse’s lymph node, from a depth of 600 to 900 micrometers, without losing focus or their signal. The images had a sub-micrometer spatial resolution. The team also imaged blood vessels at a depth of 570 micrometers in the mouse’s spleen.

Just as important as the clarity and high resolution of the imaging was the researchers’ ability to tag the cells and vessels with four different fluorescent dyes simultaneously. This will allow immunologists to see exactly how the cells are interacting with each other and their surroundings.

Now that three-photon microscopy has been successfully demonstrated on lymph nodes, Xu looks forward to seeing how much further, and deeper, he and his team can push the process.

“It’s very hard to image very deep into the tissue. And when a lymph node inflames, it becomes much bigger and it’s even harder to go through,” Xu said. “At this point, we know this technology fundamentally can go maybe another factor of two deeper than what we have shown. I think we have some really interesting directions to push it all the way through.”