Preventable — how we can stop the next world-changing pandemic

0
Shares
0
0
0
0
Could politicians have responded better to Covid? Public health expert Devi Sridhar is both prescient and scathing 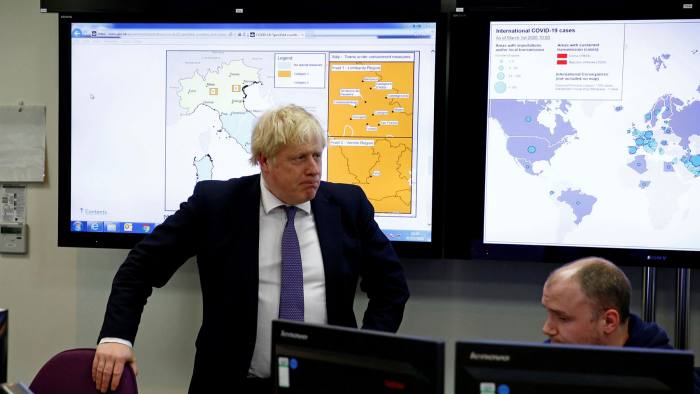 UK prime minister Boris Johnson at a centre tracking the first wave of Covid-19 infections at the beginning of March 2020 © Pool/AFP /Getty Images
A year and a half before the coronavirus first emerged in the Chinese city of Wuhan, Devi Sridhar, a professor in global public health at the University of Edinburgh, warned with eerie prescience of the pandemic looming on the horizon.
The biggest threat to the UK, Sridhar told audiences at the Hay Literary Festival in June 2018, was a Chinese farmer getting infected by an animal with a novel pathogen before boarding a plane bound for Britain.
Swap the farmer for a Wuhan wet market vendor (or a lab worker) — and Sridhar accurately predicted the beginnings of the crisis that has gripped the world over the past two years. While the emergence of a new viral threat was otherwise “entirely foreseen . . . the response taken by countries and their citizens was not quite so predictable”, writes Sridhar in Preventable.
On paper, the UK and the US ranked as the top-two best-prepared countries for a pandemic. In reality, “two of the previous leaders in global health” ended up as “tragic stories in the eyes of the rest of the world”, argues Sridhar.

“We must not forget the policy decisions made pre-vaccine, and how many lives could have been saved had the advice and the leadership been different’’

Preventable takes readers on a rapid — if somewhat unwieldy — world tour to understand why countless western nations with plentiful capacity failed the pandemic test in 2020, while less obvious candidates rose to the challenge. It also charts the catastrophic breakdown in global co-operation, emblematised by the west’s hoarding of vaccine doses throughout 2021. In February 2020, while the UK, US and much of continental Europe were “consumed by their own internal issues”, other nations were “racing ahead” with preparations for the oncoming surge, thanks to “their leaders understanding the severity of the situation”, writes Sridhar.

Vietnam closed its borders, South Korea harnessed mobile phone technology for contact-tracing, the Czech Republic masked up, Greece cancelled large-scale public events and Senegal worked with other African nations to scale up testing despite scant resources. Meanwhile, UK prime minister Boris Johnson “focused on delivering Brexit — the UK’s divorce from Europe — and on his own divorce — from his wife”, writes Sridhar. All too often, the debate over how to handle Covid has bifurcated around two extremes: “herd immunity” — initially advocated by UK science advisers and then adopted by Sweden — or an elimination strategy (known as “zero-Covid”), pursued by New Zealand and China.

Sridhar — who in the minds of many British readers will be associated with the latter strategy, having pushed for the UK to completely stamp out Covid during summer 2020 in her capacity as a Scottish government adviser — offers nuance and overlooked examples of success to this polarised debate. It is a debate between opposing Covid camps who have “become even more hardline” recently, she notes. Preventable argues that a combination of a lack of humility in the face of an infectious disease, groupthink among the scientific establishment and the poor leadership skills of populist leaders (such as Johnson, Donald Trump and Brasil’s Jair Bolsonaro) condemned some of the countries best equipped to fight the pandemic to failure in 2020.

Many of Sridhar’s early success stories, however, went on to struggle too. The Czech Republic’s cumulative death toll surpassed that of the UK in early 2021 and Greece followed suit in early 2022. Even Vietnam, South Korea and New Zealand have been unable to contain the highly infectious Omicron variant.

In the post-vaccine, post-Omicron era — in which most westerners are triple-jabbed, only a lucky few have avoided Covid infection and life is whirring back into action — the Wuhan wet market, the alarm surrounding an early outbreak on the Diamond Princess cruise ship, and even the endless months of lockdown feel like something from another world.

For Britons, Sridhar offers a powerful reminder of how “we must not forget the policy decisions made pre-vaccine, and how many lives could have been saved had the advice and the leadership been different”.

Sridhar’s is one of the first of a series of books that will attempt to extract the historical lessons from the pandemic. If we’re to stop history from repeating itself when the next pandemic pathogen emerges, books such as Preventable are very much welcome.

Read More
LLong Covid
This transcript has been edited for clarity. Hello. I am Art Caplan. I’m in the Division of Medical…
Read More